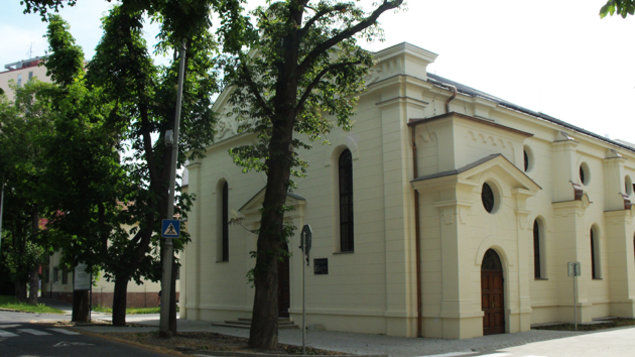 On the map from 1860 as well as on the older map a 3-wing building can be seen, however, this time all 3 wings are bricked. The building filled up the northern end of  an originally long lot (lot No. 600) gripped from both sides by narrow roads (on the east it was the road in place of an original stream). Arisen synagogue must have been a part of this presented 3-wing architecture. It is indicated by surprising fact that the first Levice synagogue was not a solitary building, as its up to the present day existing successor, but it was architecturally connected with another 2 functionally related buildings. It can be  supposed that a private school, which had become public one in 1854 simultaneously along with  the construction  of the first synagogue, acted in the 3-wing space arrangement out of the new synagogue. In comparison with the map from the year 1843, an east brick-built wing was added that replaced the wooden structure. Its function is not obvious, it could be hypothetically associated with a ritual bathing which, as well as above mentioned conctructions, should have originated in 1854. In the first half of the 19th century about 160 Jews lived in Levice. Due to growing number  of  Jewish community (in 1880 there were 903) the synagogue was inconvenient, therefore a decision was made to build a new and bigger one that has existed up to this day. The new synagogue had 400 seats. Archive of Jewish congregation was destroyed but interesting data of  the new synagogue´s construction, apart from recently discovered charter and local weekly paper BARS, are provided by documents from Land Register of  the District court in Levice . We learn that the town had to take a loan for the construction of the new synagogue. Probable reason was  that not all town representatives (among them treasurer Móric Ehrenfeld) agreed with its construction. Preliminary budget was 15 000 golds and 22 000 including furnishings.

Along with documents of  the loan also transcriptions of  the Jewish congregation administration´s  sessions have been preserved. On 4 February 1883 a decision to build a new church and school with a flat for school caretaker was made. Jewish community had just a part of amount, some money was raised by fund-raising campaign, they were missing 9 350 golds which they wanted to cover through

„ voluntary loan“ from some members of the community. Another option, that finally ensured missing funds, was a loan from the bank that was guaranteed by the Jewish congregation´s property. Transcription indicates that Jewish community had to make decisions on each heller used to fund the  new building. They also made  decisions whether to buy new benches or keep the old ones. A new „ sitting order“ existed in the synagogue, individual members of the  Jewish community had bought their seats. After construction of the new synagogue the seats were offered for public sale. Seats were classified into 5 classes, the best 1st class cost 5 golds. Money gained from transfer of the old seats into the new synagogue went into the treasury of the congregation, they succeeded in paying money back to the bank within a year. Money to the congregation treasury were flowing from different payments, such as weddings (held in the new synagogue), 20 golds were paid for  full lighting, for partial lighting just in front of the Tabernacle 5 golds, for half – lighting of the synagogue 10 golds. Poor members did not have to pay for lighting by the Tabernacle. All members of the Jewish congregation, who wanted to contract marriage out of Levice, were obliged to pay 2 – 6 golds. 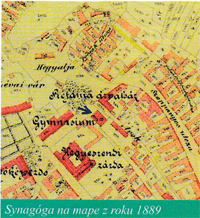 Present synagogue is illustrated in the map from the year 1889. It was built as an unattached construction that  by its ground plan replaced an entire 3-wing object. Data from literature, claiming that new synagogue should have been much larger than its predecessor, supported that fact. Remaining area of an original long lot (lot number 600) received a new number (lot number 432) and in the south-east off the synagogue an unattached bricked object, that was supposed to be a new school, was built. Thus original school  had been demolished to acquire a land for the new building, present building of the synagogue. As it results from an article of BARS weekly paper of 29 April 1883 as well as from a single charter, the designer of the synagogue was a builder Gustáv Šišák from Kalná nad Hronom who built it according to his own stylish plan. Author of the article  assumed that the building would be completed by autumn of that year. We can learn some information on construction work progress from a short report from BARS weekly paper of 16 September 1883.

Synagogue was built like a rectangular construction with walls that time rhytmized just by flat pilasters and yet without lateral salient of walls. Its interior is created by aisle with ladies tribunes which run in a circle. Aisle is covered by kind of annular vault whose batters lie on the cappings carried by cast-iron columns supporting the tribunes. Through the main portal in the northern wall there is an entrance through the flat – ceiling anteroom to the aisle. According to  traditional layout there was an elevated place in the middle that was called bíma (podium). There were 2 bímas, one in the middle and the other one by the synctuary. 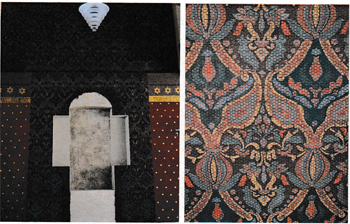 From modestly preserved period-style decoration up to the present day there is the most significant mural painting coming from 2 period-styles. Original vault painting from the year 1883 with opulent historicizing apparatus containing geometrical and stylized botanical motives is the only one preserved in an entirely compact condition without repaint. Painter Karl Trommersdorff from Levice and Ferdinand Relstscha (assistant painter) from Nitra were its authors. Their names along with the date of completion of decoration works (30 August 1883) were revealed during the restoration of the arch. Without intervention alongside the arch only fragments of painting on the middle area of the frontal – south wall around the altar niche had been preserved thanks to the fact, that later it was covered by a new, much bigger altar cabinet. Surface of the synagogue´s longitudinal walls on the vertical level of galleries had a painted motive of thick flecks in two-colour combination (red and ochreous) on the grey coating of passive surface. Plinth formed a  30 cm tall grey stripe. Decoration of the ground part of the walls of „fleck“ decor was identical with galleries, however, the plinth as tall as 110 cm was designed splendidly, in  dimensional and colour opulence in the ground area.

On the bright – red underlayer lay rectangular mirrors in brown colour trimmed by olive – coloured stripe are highlighted. In the axle of the synagogue´s walls´  length  among the mirrors the motive of circle, in which hexagram is made on  the olive – coloured paintcoat with black line, was created. Lower part of the coating has been removed in an entire area of the synagogue recently, thus design of the lower socle is unknown. 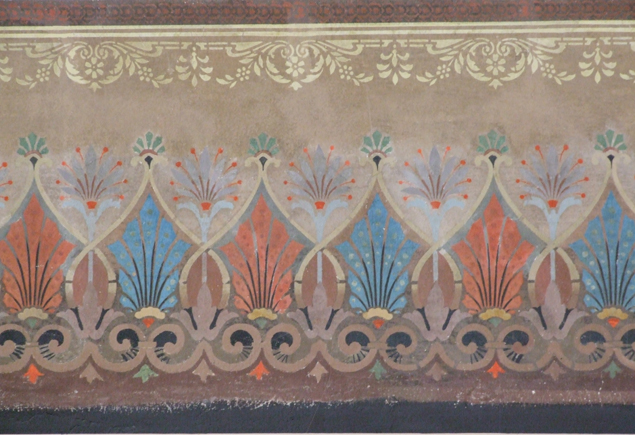 Gable wall were designed differently from the longitudinal walls. Motives of the upper parts of both gable walls are in areas demarked by faces of the vault mutually identical and  motives from the vaults are passing  to them. Decoration of the walls can be divided into imitation of architectonic segments, such as astragal, sea wave, tooth ornament and imitation of fabric consisting of twine with clusters, which are  freely hanging down. Whereas they are hanging on the paintcoating created by illusional fabric on the southern wall, the northern wall is covered with just a simple motive of „fleck“ decor identical with the longitudinal walls of the synagogue. Opulent painting of the southern wall is related to the need of highlighting the presence of the saint cabinet. Decoration was covering the wall around the niche with the saint cabinet in width limited by galleries and along the entire height – from the floor of the aisle up to  the level of vault batter. 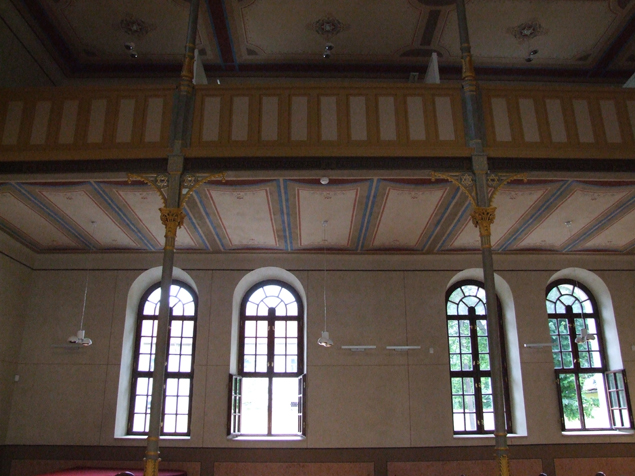 As restoration research showed, during erlier construction works decoration of all the walls with the exception of the aisle vault had been covered with paintcoating, and as it has been mentioned with the exception of the central area of the southern wall, with windows of 168 x 160 cm dimensions. Likewise original painting, the plinth even  in this layer differed from the plinth of galleries. Whereas on the galleries  the plinth  was just a simple monochrome low stripe, on the ground floor the plinth´s surface was structured by motive of mirrors in tricoloured combination.

On the longitudinal walls of the building there were 3 rectangular mirrors designed with marbled motive. Similarly as  in a previous phase, also in this case the southern wall, that  formed the background of a significant artefact of the synagogue – the saint cabinet,  was designed independently . 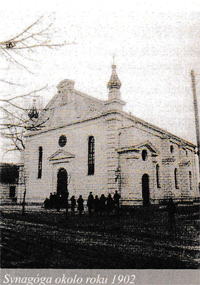 That time an original cabinet place in a small niche had been replaced by a new one, which did not require major amendments of the niche though (it was evenly enlarged to both sides approximately by 100 cm), however it contained  tall and wide architectonic parts that covered the original painting of the wall in a great extent, in stripe running from the floor up to the vault batter. New painting originated around  the new architecture. In the upper part of the wall ( from the floor of galleries up to the level of the vault batters) they created the transcription of  original ornamental patterns, though in softer colourity. From the flooring of the groundfloor  up to  the level of the galleries´  flooring  a new motive of fabric was created that covered the original one. 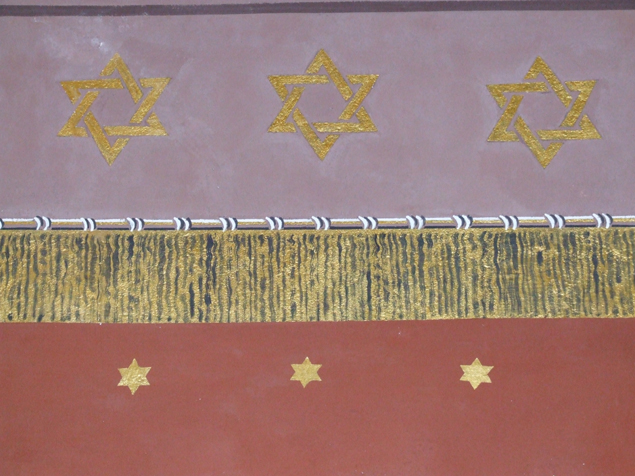 New decoration of the synagogue is created by horizontal violet  stripe with 3 hexagrams placed next to each other depicted with bronze lines. Lower part of the stripe is trimmed by illusional rod, of which clusters are hanging loose. The clusters reach a brick red surface covered with small areal hexagrams. Additional painting of the synagogue can be linked with reference to the reconstruction in the year 1902, that was carried out by an architect and builder Rudolf Czibulka from Levice. 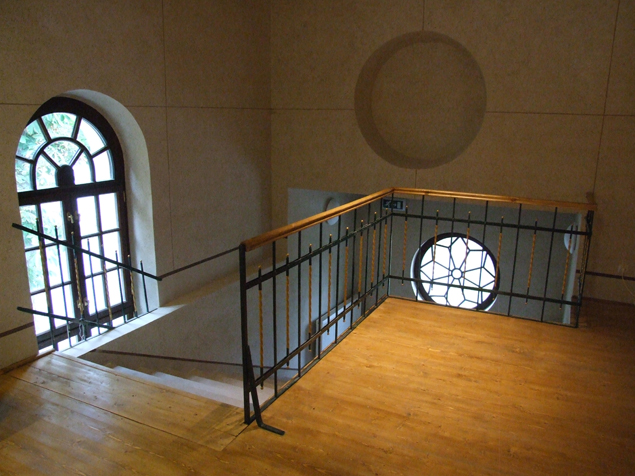 A partial relic survey succeeded in specifying even some of  an additional rebuilding of the architecture. The construction of lateral staircase projections has affected the original condition of the synagogue. Alongside staircases, forms of the staircase have also been rebuilt  as well as orientation of the flight of stairs have been changed. At this time  they built out a couple of supports at the positions of original flat pilasters, that significantly come out before the facade, to each of the lateral walls. The look of the salient of wall and supporters refer to presumed realization of those restorations in the year 1902.  In 1934 a modern building of school close to the synagogue was started being built according to a functionalistic project of an architect Jacque Oblatt, who was working in Nitra. In May 1944 it became a part of the ghetto – delimited area for Jews gathered before the deportation. Ironically, the building of Catholic orphanage, which was standing next to the synagogue, also became its part. 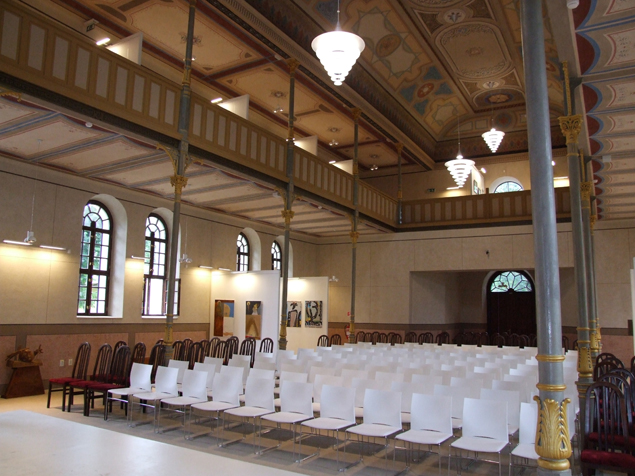